An external audit reveals that Óscar de Alfonso would not have justified € 23,000 of his expenses

An english Brother sent us the following:

Having read the Grand Treasurers report and Oscars plan for next year, I feel that I must bring this to your attention.

36,000 euros spent by the GM on unapproved travel expenses and a refusal to show receipts for same.

He says that Oscar’s many trips to South America are NOT approved by the GLE and the GT can’t pay for them, but Oscar just keeps sending in his Visa bill to be paid without any justification or invoices.  It is patently obvious to all that his trips to South America have been claimed against the GLE through incorrect channels.

The GT was forced to bring this up at the last Assembly and treated in an extremely rude and threatening manner by Oscar in front of the whole Assembly.  Read the Grand Secretary’s report, it’s all there.

In Oscars manifesto and plan for next year he says he will reduce the powers of the Grand Treasurer and the Grand Orador, I wonder why?

He also states that Installed Masters who haven’t held the chair of a Spanish lodge “for at LEAST one year” will have no vote.  So that’s the end of voting for a load of British and foreign Installed Masters!

Apparently the GLE is under intense scrutiny by other Grand Lodges, unsurprisingly.

See this attached report by the Grand Chancellor of the UGLE that I found at in FREEMASONRY TODAY magazine (click here to view), pay particular attention to his paragraph for the reasons in making Irregular the GNLF.

No UGLE representative has been present at a Grand Assembly of the GLE for many years, for logical reasons.  Guess “Who’s coming to Dinner?” this time?

Talk about turkeys voting for Christmas.

The report of the GT 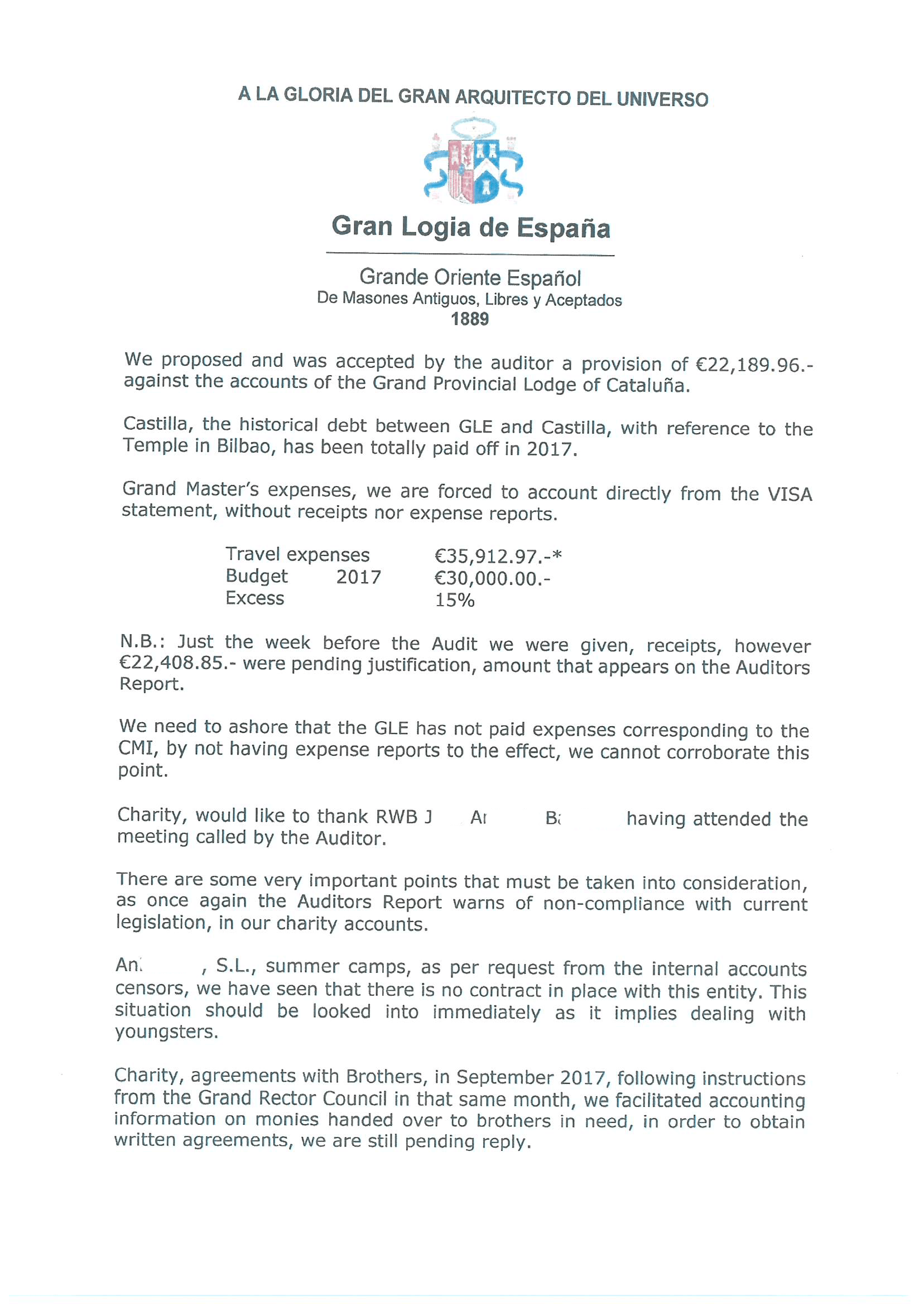 This website uses cookies to improve your experience while you navigate through the website. Out of these cookies, the cookies that are categorized as necessary are stored on your browser as they are essential for the working of basic functionalities of the website. We also use third-party cookies that help us analyze and understand how you use this website. These cookies will be stored in your browser only with your consent. You also have the option to opt-out of these cookies. But opting out of some of these cookies may have an effect on your browsing experience.
Necessary Siempre activado
Necessary cookies are absolutely essential for the website to function properly. This category only includes cookies that ensures basic functionalities and security features of the website. These cookies do not store any personal information.
Non-necessary
Any cookies that may not be particularly necessary for the website to function and is used specifically to collect user personal data via analytics, ads, other embedded contents are termed as non-necessary cookies. It is mandatory to procure user consent prior to running these cookies on your website.
GUARDAR Y ACEPTAR
Ir a la versión móvil